Crucified Lamb Is the Only Way to Do Barbecue in Patagonia

In Patagonia, you can find sheep on pizzas, in empanadas, and in perfectly spiced burgers. The classic preparation, however, involves a lamb being roasted over a wood fire, the carcass stretched across an iron cross. 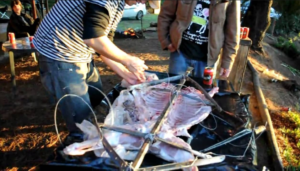 A lone cowboy walks into a bar in New York City. The bartender, taken aback, remarks, “Partner, you’re a long way from Patagonia.”

“That’s amazing,” the cowboy answers. “How did you know I was from Patagonia before I even opened my mouth?”

“Oh, that’s easy,” the bartender says. “You’ve got a big clump of sheep wool sticking out of your zipper.”

Across the barren landscapes at the southern tip of South America, for hundreds of kilometers there is little more than grass, rocks, scrub trees permanently bent over from incessant wind, and endless herds of sheep. The wooly livestock form a staple of Patagonian diets, and you can find mutton in any form: on pizzas, in empanadas, and in perfectly spiced burgers. The classic preparation, however, is cordero al palo,which is lamb roasted directly above a wood fire, the carcass stretched across an iron cross. 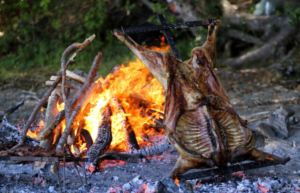 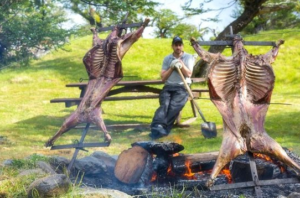 Although the relationship between men and sheep in Patagonia is intimately tied to the history and culture of the land, the seemingly timeless bond only dates back about 150 years. Harsh weather and poor agricultural conditions initially offered little incentive to Europeans to settle the area, and for three and a half centuries after Ferdinand Magellan first sailed through the strait that now bears his name, the region was largely ignored by conquerors and colonialists.

Not until the late 19th century did settlers realize that the expansive tracts of grasslands made perfect grazing grounds for sheep, and Patagonia has never been the same. When new arrivals from Europe and other parts of Chile annexed the indigenous people’s traditional hunting lands to raise their livestock, the natives quickly adapted to hunt the sheep instead. In response, the ranchers thoughtfully attempted to work out a compromise that was acceptable for everyone. (Just kidding: They launched a campaign of slaughter, coming very close to wiping out the entire indigenous population.)